A Country Bed & Breakfast in Town

Whether you've come to Costa Rica with a thirst for adventure or a yen to relax, at Casa de las Tías we'll provide a great start! Here are a few facts on the house and its surroundings. See rooms and reservations for a list of our services.

Your hosts Pilar and Xavier live at Casa de las Tías and hope to make your stay as comfortable as possible. So if you have any questions, just knock...

The house Once the home of a former Costa Rican Labor Minister, we named it "the Aunts' house" to evoke the familial warmth of Pilar's grandaunts' home in Colombia. Made of fragrant "bitter cedar," its floors are macawood (cristobal) and jicaro. The dècor includes antiques, original art, and textiles ranging from Indonesia to Latin America. Interspersed throughout the house are charcoals and oils by Coriolano Leudo, well-known painter and Pilar's grandfather.

The garden The pride of our house, it blooms with hybiscus, anthurium and lilies, and provides fruits such as mangos, bananas, papaya, soursop or guanabana, , seville oranges, grapefruits, mandarin oranges, lulos and Messina limes. From our organic vegetable garden come the basil, arugula, and culantro that liven our breakfast fare. Our guachipelín and roble amarillo trees are a haven to many birds, including oropéndolas, clay-colored robins, mot-mots, parrots, the rufus-tailed hummingbird, and seasonal migrants such as Baltimore orioles,yellow warblers,the rose-breated grossbeak...and even the occasional hawk. When you sit on the grass, watch out for the ants - they pinch hard. Well, this is life in the tropics...

Two guests on the front steps with Pilar and Xavier 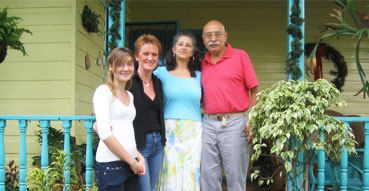